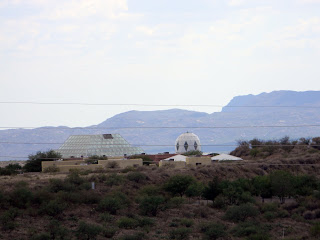 Biosphere 2 is a 3.14-acre structure originally built to be an artificial, materially-closed ecological system in Oracle, Arizona (USA) by Space Biosphere Ventures, a joint venture whose principal officers were John P. Allen, inventor and Executive Director, and Margret Augustine, CEO. Constructed between 1987 and 1991, it was used to explore the complex web of interactions within life systems in a structure that included five areas based on natural biomes and an agricultural area and human living/working space to study the interactions between humans, farming and technology with the rest of nature. It also explored the possible use of closed biospheres in space colonization, and allowed the study and manipulation of a biosphere without harming Earth's. The name comes from Earth's biosphere, Biosphere 1. Earth's life system is the only biosphere currently known. Funding for the project came primarily from the joint venture's financial partner, Ed Bass' Decisions Investment, and cost $200 million from 1985 to 2007, including land, support research greenhouses, test module and staff facilities. (From Wikipedia)

Biosphere 2 is the size of two and a half football fields. The structure is the biggest enclosed working system ever produced and sits at the base of the Santa Catalina Mountains near Tucson. Inside the well preserved edifice, scientists were able to test the changes of the air, water and soil enclosed inside. Also within the sealed walls was a rainforest, an ocean with a coral reef, mangrove wetlands, savannah grassland, a fog desert, an agricultural system, a human habitat, and a below-ground level technical enclosure. The sealed structure generated heating, cooling, and electricity through solar panels.

From 1991 to 1993, Mission 1 experiment with eight people was conducted where they were locked inside for two years. The second mission with a group of seven people only lasted six months because of disagreements over the cost of the project. The mission ended up being shut down early.

Sharon and I decided to take a drive up to see Biosphere 2 while waiting for our friend to get home. Even though they do provide tours, we just circled the parking lot and then left. We could see the massive structure from the road. Perhaps next time we will take the tour. 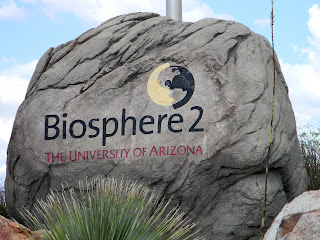 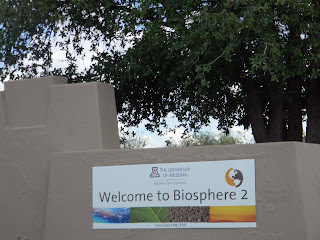 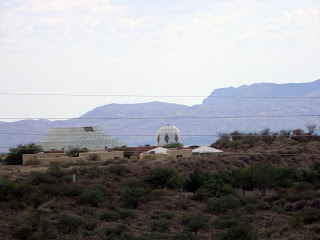