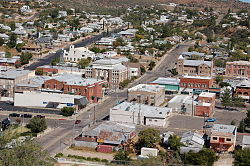 Globe was founded in 1875 after prospectors discovered silver in the San Carlos Apache Reservation. Some of the silver nuggets had a globe-like shape to them. Globe was originally a mining camp and is called Besh Ba Gowah in western Apache which means, “place of metal”. By the 1900’s, many of the silver deposits were drying out and more copper was discovered in its place. Globe’s Old Dominion Copper Company was one of the riches mines in the world. The mining camp was now a city with retail stores, banks, newspaper, and a stage linking it to Silver City, New Mexico.

Globe enjoyed its popularity and continued to prosper. It did have a sordid past as well with many murders, stagecoach robberies, outlaws, lynchings, and Apache raids. Many famous names in history had ties to Globe such as Geronimo and Apache Kid. After being brought from the Arizona Territorial Prison in Yuma, the Apache Kid murdered Sheriff Reynolds when he was taken out of the stagecoach to walk up a hill. The Sheriff wanted to save the horses from any more strain but was killed in doing so. The Apache Kid’s trial was held in the Globe Courthouse on October 23, 1889. Other famous names such as the Clanton brothers, Ike and Phineas, also ended up in Globe after the gunfight at the O.K. Corral. The local sheriff trapped the brothers, killed Ike and arrested Phineas. After getting out of prison, Phineas decided to lay his hat in Globe where he died of pneumonia in 1906 and was buried in the Globe Cemetery.

Globe has many historic sites and buildings within its city limits. Sharon and I are doing another ghost hunt at the Noftsger Hill School at the end of the month which now serves as a bed and breakfast. Last time we were there, Sharon heard a little girl talk to her and the chalk on the board move. This time we are doing a full-on investigation. We have lots more equipment and hope to see some action that night. We are also planning on doing some experiments at the Besh-ba-Gowah Pueblo ruins, and the old jail. We are hoping to see other historic sites Globe has to offer and as always, I will be sharing it all with you.